skip to main | skip to sidebar

I spent four wonderful months in the Holy Land. The experience was worth the struggle of four simultaneous jobs and full credit hours for a year before I could afford it. It was worth every penny. It was worth it all. Worth it for so many reasons. Thanks for reading my blog, it has been a pleasure to share some of my joys with you. 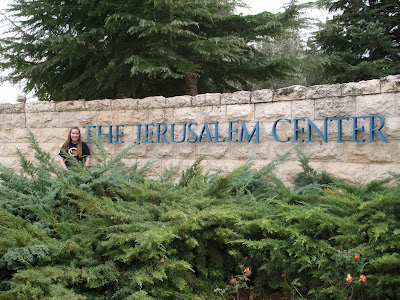 You may see the world for its enticing tourist allure. This is different. It will permeate your thoughts forever afterward. You'll never forget it. If you have the means and a desire to go, I encourage you to GO. Forget about London, Florence, Vienna, or Moscow; forget Sri Lanka and the Caribbean. So many have spoken to me about my experience and said "I've always wanted to do that," when I know they've gone other places instead. I tell you it won't happen until you choose for it become a priority. If you have the means, GO.

Afraid to pick your way through the dangerous and foreboding Middle East? Pittsburgh is more dangerous than Jerusalem. For that matter, so is Paris. Afraid that a terrorist attack will strike when you're there? You should be more worried about a car accident, it is much more likely to happen. Don't know your way around? Join a tour group--there are many, the guides know their stuff, and you'll love traveling in a group of people you can relate to.

If you have the means and a desire to go, GO. It will be easier to get there than you think.
Posted by Rachel EM at 3:56 AM 3 comments:

Church of the Holy Sepulchre 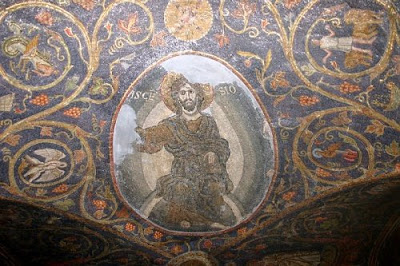 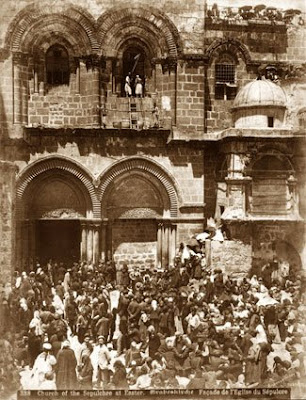 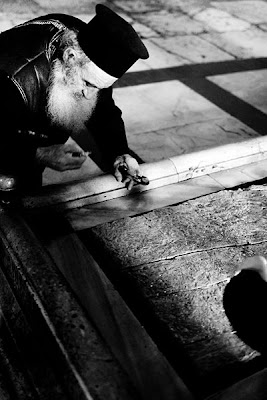 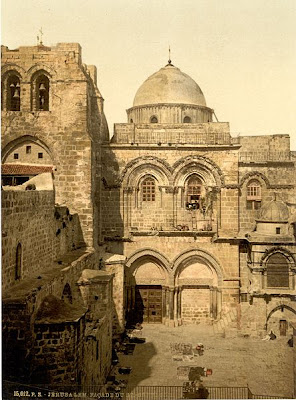 Accepted by most Christians as the site of Golgotha, where Christ was crucified, and the site of his sepulcher (spelled Sepulchre by our Latin-loving-Oldy-Anglish European churches). Hailed as the "most holy site in all of Christendom," thousands of pilgrims pay homage to the location every year.

Our faculty hoped we would not only tolerate, but learn to appreciate and love the faiths of others. And though it would never have occurred to us to be disrespectful, we knew that anything irreverent in one of their holy places would result in severe punishment, likely over-our-dead-bodies. But like I said, that never would have been a problem with us. Every denomination received the same quiet respect from all of us.
For myself, I felt Islam and Judaism easier to respect than the many varied branches of Christianity. My closest friends voiced similar opinions. One friend joked about wanting to write an essay entitled, "Are Mormons Muslim?" as a play on words to the common topic "Are Mormons Christian?"

For those of you who may not know, "Mormon" is a nickname for members of the Church of Jesus Christ of Latter-Day-Saints. We are encouraged by our church leaders to say we are members of the Church of Jesus Christ to dispel the belief that mormons are not Christian; faith in Christ and devotion to him is the center and core of our religion. At orientation I learned that for the next four months in the holy land I had a new mantra: "We aren't Christians. We're Mormons." While not changing our beliefs in any way, we hope that by making the distinction between us and what the rest of the world sees as followers of Christ. And now, having seen the difference between how Mormons and Christians interact with Muslims and Jews, I understand why. Particularly the difference between Mormon leaders and Christian clergy.

Okay, I'm coming across clear as mud, I'm sure. Sorry. I can't really explain it in words. The best example, I think, is given by Tevye in Fiddler on the Roof when he indicates the Catholic priest and says "we don't bother them and so far they don't bother us." Muslims treat the Christians in mostly the same way. If they were to ask a direct question, sure, they'd talk to you. But on the other hand, Muslims and Jews talk to Mormons much more freely. Now having said this I can think of a dozen exceptions to this example--mostly involving the difference between Jews and Jews, Muslims and Muslims, Catholics and Born-again-Christians. No matter what your religion, some people just won't socialize with you. The easiest example of this are the Orthodox Jews, who don't talk to anyone else, make eye contact with anyone else, and will walk around you as if you aren't there. Still, I'd get the same level of disdain from some Christian tourists while walking through the Christian quarter--one glance at my Mormon fanny-pack and they'd look the other way (not kidding). Once in the middle of small-talk with a preacher from Alabama who, seconds after learning I was a student from Utah, perceptibly changed his cordiality to distant formality. Contrast that to the woman who saw Mormon students reading the New Testament outside the Garden tomb and was moved to tears, crying "bless you kids!" But that's another story. For now just pretend to understand what I can't seem to explain, and I'll move on. Pfffff.

Sorry. Obviously I got carried away. The difference between Mormons and Christians is a passionate subject for me. Which brings me back to the subject I meant to discuss: Church of the Holy Sepulchre.

Who originally built the church is a touchy subject, as many factions claim to have been responsible. For centuries the Church of the Holy Sepulchre has been managed by a joint collection of religions:

In 1555 when the church was renovated, control of the church oscillated between the factions, often through outright bribery or violence, neither of which were uncommon. In 1767 a temporary solution was reached: a territorial division of the church between the different factions. In 1852 the situation became permanent. Times and places of worship for each community are now designated and strict, though many areas are labeled "common ground."

Sadly, even this tense situation could not stop the violence, which continues to break out every so often--"in 2004 during Orthodox celebrations of the Exaltation of the Holy Cross, a door to the Franciscan chapel was left open. This was taken as a sign of disrespect by the Orthodox and a fistfight broke out. Some people were arrested, but no one was seriously injured (Wikipedia)."

Many holy sites are managed the same way, including Church of the Nativity in Bethlehem (which had a fist fight between priests this Christmas after someone cleaned a part of the church that wasn't part of their jurisdiction). This situation really is no joke. But it does have some amusing results. The "immovable ladder" for instance.

My first day in Jerusalem I asked my teacher about a small wooden ladder over the door of the church that I thought made the place look rather shabby. My teacher Richard Draper said, "I wondered that myself when I first came here in the 70's." That got my attention. What did he mean that the ladder had been there since the 70's? I did some research and discovered that all anyone knows about the ladder is that it was placed on that window ledge "sometime before 1856," but no one knows how long it was there before that. Here's a picture of the ladder in 1891. You see, no one church faction controls the entrance to the church, and the ledge beneath the windows above the door are "common ground," and thus cannot be altered unless all factions agree to the change. Will they ever agree? Who knows.

In sum, the best description of the Holy Sepulchre is that it is a strange collection of shrines. Both gaudy and primitive, frequented and forgotten, humble and resplendent, antiquary and modern, all can be found within its many spaces.

1. Do not underestimate the staircase. You risk your life (at least your future mobility) climbing up or down the perilous flight. Most dangerous staircase in Jerusalem. BEWARE!

2. The church has its own crest.

3. In 1808 a fire (not the first inside the church but hopefully the last) collapsed the dome, which then had to be rebuilt.

4. Constantine decreed that the church should be built.

5. I took a few slightly-used candles out of their trash cans and brought them home. Shocking! ...and now you know. I hesitate to use the word "took" as that implies that I stole them, when they were in the trash and thus unwanted. I do not, however, deny that I removed them.

6. You can worship at FOUR different calvary sites under one roof. Take your pick.

7. The "Stone of Unction" is traditionally where the body of Jesus was anointed and prepared for burial. The stone is kissed by AT LEAST a hundred different people every day. I never touched it.
Posted by Rachel EM at 9:39 PM 4 comments:

No Pradai or Prado here. (See the movie "Serendipity" for the joke) 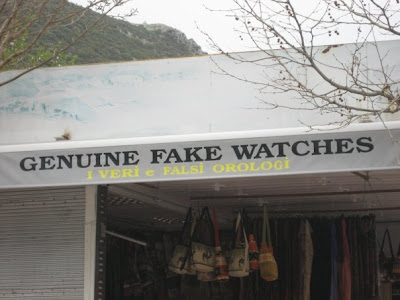 Photo actually taken in Istanbul... but I couldn't resist posting it here.
Posted by Rachel EM at 9:30 PM 5 comments: 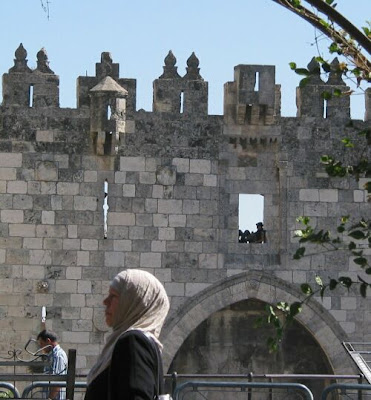 In this picture: Muslim matriarch, and Israeli soldier sitting in the "window." 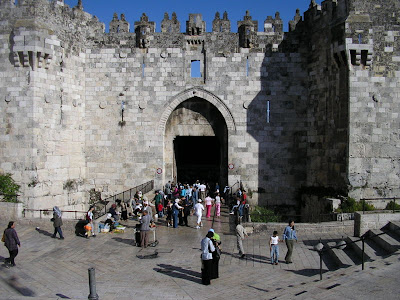 Visits to the hub of the Old City nearly always travel through Damascus Gate. The largest entrance to the city, and most traversed, it connects to the divide between the Muslim and Christian quarters of the city. 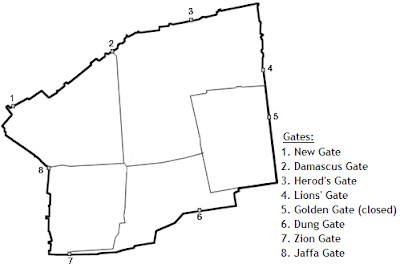 Orientation here is standard European, with North being at the top. (5 faces east, which would be at the top if we were in the mid-east... everything has an eastern orientation to them. So the Damascus gate faces slightly Northwest, if you get it.)

Flanked by fruit stands and falafel shops, shoes, clothes, hats, music, ripped off dvds, fish, sesame butter (which is really sweet and tasty), jewelry, sugar dates and pistachios, and dozens of little boys running around you. The little boys believe they are adults, but with less responsibility and thus more freedom. ATTITUDE. But just the boys--little girls are always with their mothers aunts or grandmas, often all three. I swear the boys have no supervision, though. They scamper everywhere and won't hesitate to bowl you over with their produce carts if you don't get out of their way. They command you to move, in fact. They won't budge out of your way. I'll have to post more pictures of Damascus gate from the inside with all the people and stuff, but for now--just this one of the outside-top.

Follow this link for a virtual-tour of the exterior Damascus Gate. If you do, you'll see the independent boys and carts that I mentioned, as well as groups of women who are (as always) moving in flocks. 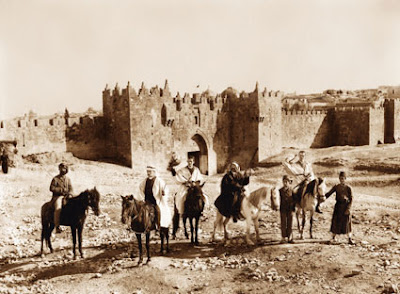 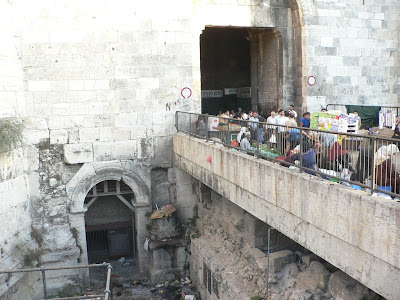 To the left side of the bridge 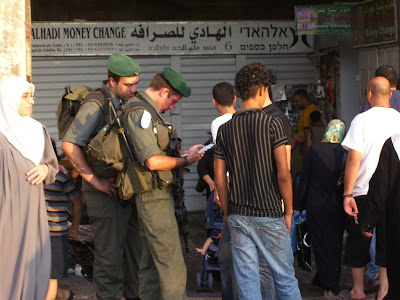 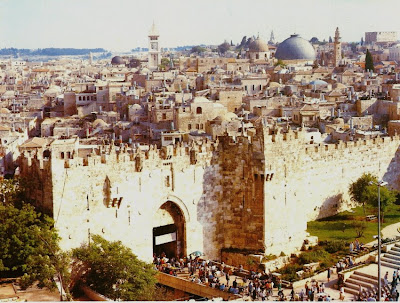 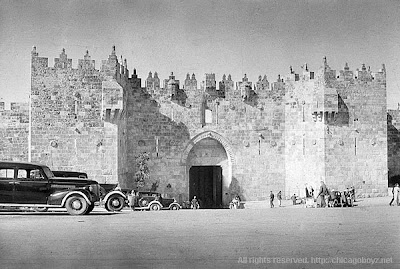 Solve the mystery! Based on the cars in this picture, what's the date of the photo? Care to guess a year, Dad? 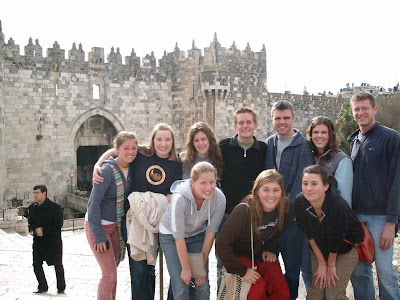 Friends, last day in town. The dark haired girl with the orange bag is my sweet-awesome hip roomate AMBER, whom I love to death. I love her so much she had to leave Provo when we got back just to escape me. LOVE LOVE LOVE Amber. 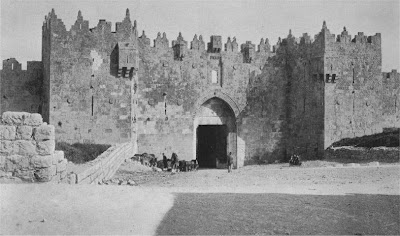 Another great old shot. Wish I could've seen it when it looked like this. 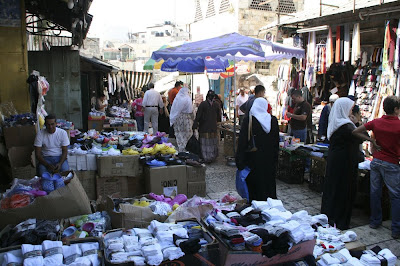 Inside the gate today. Need some new socks? 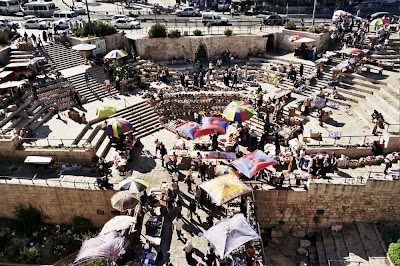 Outside today, from top of the ramparts. Wares are sold along every stairway.
Posted by Rachel EM at 9:43 PM 2 comments:

This Way to Paradise 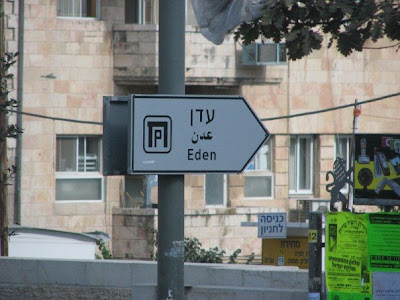 I went to Eden, by the way, did you know? Twice, actually. Once in northern Israel near "Tel Dan," which was...admittedly the prettiest natural spot I saw in Israel, and again in central Israel, where this sign came from. HA! Funny. Now all I have to do is go to Missouri. It was funny with all the students looking at the signs for Eden and sniggering, "wrong continent, bucko!"
Posted by Rachel EM at 7:51 PM No comments: